The essential solving technique for all Sudoku puzzles

A Sudoku X-Wing pattern occurs in many of the more difficult Sudoku puzzles. Your ability to identify and solve this pattern will often break the logjam and lead you to the solution of a challenging Sudoku game. In this article, I use one of my hand crafted very difficult puzzles that has a known X-Wing pattern. Play sudoku puzzles online for free. Different sudoku puzzle levels, easy sudoku, medium sudoku, hard sudoku. Print sudoku for free.

All correctly formed Sudoku puzzles are solvable using logical solving techniques. The majority of puzzles can be solved using just one key technique.

As you know, the numbers from 1 to 9 must be placed once in every block. Using this knowledge, one can attempt the easiest technique: identifying a unique number to go in each block in the grid.

Here, you can see the highlighted block has 4 out of 9 squares present. Generally, it at the beginning it is wise to choose blocks that are more complete: these often lead to some easy squares to solve.

You should be able to spot a 3 to the right, eliminating the possibility of another 3 in the top row.

If you look down from this block, there is a second 3 allocated to the first column in the block.

Now, both the top row and the first column of the block already contain a 3. With the row and column eliminated, there is only one square remaining for the 3 in the block. You can now place the 3 as shown below.

This method is relatively easy, provided you can identify good numbers to search for.

Continuing with the same method, there is an easy 6 in the centre left block. 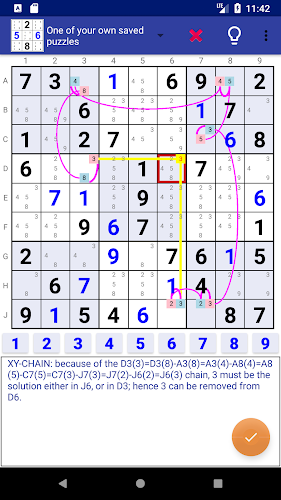 The next method is very similar as it utilises the same technique, but this time for rows and columns. 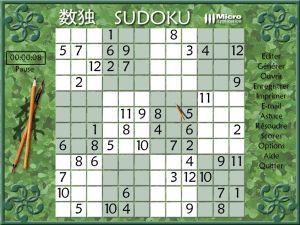 The Sudoku has several near-complete rows and columns. Pick one and identify the numbers that are missing.

In this column, there is space for a 2, 6 and 9. However, the 6 can only lie in one of the 3 available squares as there is a 6 to the left of the other remaining gaps in the column.

Generally, it is a good idea to focus initially on the same number. In the past example, you can see that the first 6 lead directly to finding the 6 in the column.

Continuing along this line, it is easy to spot another 6 in the block above.

On this occasion, you can place the final 6 in the bottom centre block. Usually, it would not be possible to place all the remaining numbers in sequence.

In fact, this 6 is particularly easy to spot. There are other 6s in blocks above and to the left and right. In addition, the 6 has only one remaining place for this row and column.

Figure 9 demonstrates the different techniques that can go into finding a particular value.