Enigmo is a unique 3D puzzle game where you manipulate slides, bumpers, and other pieces to control streams of flowing liquid.

Enigmo and Enigmo 2 are respectively 2.5D and 3D arcade-style computer games for Windows, Mac OS 9, Mac OS X, iOS and PlayStation Minis developed by Pangea Software. They both involve moving certain substances into their proper containers. The music in both games was recorded by Michael Beckett.

Enigmo was created in 2003 by Pangea Software and was their most successful game ever sold at the time. The graphics are three-dimensional, in a sense; but gameplay is strictly limited to the horizontal and vertical axes. Liquids (water, oil, and lava) fall from droppers and will bounce around the walls of a mechanism. Gameplay consists of manipulating a limited number of dynamic items (such as bumpers, sliders, accelerators, and sponges) to affect various streams of flowing liquid so that the droplets reach their destination: tanks specific for each liquid. The player wins the level when all tanks on the level are filled with 50 drops of the appropriate liquid. In addition to the pre-designed levels, players can create their own using the game's built-in editor and download others for free off of the Pangea website.

In 2004, Aspyr Media ported a 2003 release of Enigmo to the Windows Mobile platform.[1] This version was included with the Dell Axim x50v model PDA; the software is available for purchase from Dell and appears to be limited to the x50v model.[2]

In January 2011, a version of Enigmo is set to be released in the PlayStation Store as a PSP Mini. It will be developed and published by Beatshapers.[3]

Enigmo 2 was introduced in February 2006, and expands upon the basic principles set down by the original. Water is still a substance that can be manipulated, but lava and oil were swapped for laser beams and plasma particles. The game adds the dimension of depth to gameplay, and many solutions involving rotating the camera or objects in three dimensions. The graphics were also improved. The game takes place in outer space, specifically near Earth, Mars, Saturn, and asteroids, but gravity functions as it would on earth. Like the original, each container must have 50 units to be considered full. When all containers are simultaneously full (they lose their contents over time), the player wins the level.

During WWDC 2008, it was announced that an iOS version of Enigmo was in development and would be available for purchase for the price of US$9.99 at the launch of the App Store. The game makes use of the iPhone's multi touch interface and is controlled entirely via touch. Players can use the swiping and pinching actions to zoom and pan and use their fingers to position the puzzle pieces. The game has been a success; it was voted the 'Best iPhone Game' at WWDC '08 and has been met with very positive reviews in the App Store. Originally including only 50 levels, Enigmo has been updated to allow user designed levels created on the desktop versions of the game; the price was dropped to US$4.99 at that time. It was then dropped to US$1.99 on October 8, 2008 and later to US$0.99 for Black Friday. It is currently on sale for $0.99.Enigmo for iPhone and iPod Touch are now available in Dutch, German, Spanish, Japanese, Italian, and French. JR Language Translations provided the localisation of the game to Pangea Software.

On September 2, 2009, Pangea Software released Enigmo 2 for the iPhone.[5] It is very similar to the Macintosh version, although it uses multi-touch to control. On September 24, it was updated to support the Retina Display and the iPad. As of 2011 it costs $2.99 and is available from the App Store.[6] Base of Operations: New Jersey 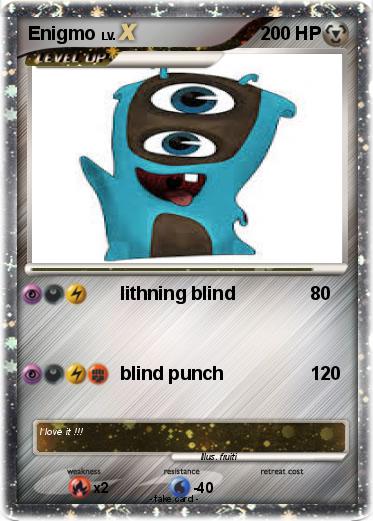 Powers/Abilities: Every portion of Enigmo's body, when separated, remains under his control, and can re-shape itself into a duplicate of his body. If his body is divided into 12 pieces, 12 smaller versions of himself will exist. He can re-merge his body together again at any time. It is likely that he possesses other abilities related to shape-shifting, but so far, they are unrevealed.

Enigmo possesses the power to split apart and regather at will, in time using the focused mass to create thousands of duplicates of himself. While smaller versions have smaller brains and lose their intelligence and skills, they rejoin the larger Enigmo, who then absorbs the skills, experiences, and educations of the others. Some Enigmos can be separated from the host body for so long that re-absorption can become difficult. Enigmo struggles when at giant-size, as his body cannot contain his full weight, and after he breaks a bone, the bone remains broken when he splits into composite parts of himself. Enigmo has infiltrated multiple parts of the government, military, and major business, meaning he has a tremendous amount of knowledge and skillsets.

History:
(Avengers I#370) - A member of Warlord Kro's Delta Network, Enigmo was contacted by him following one of his matches at the Unlimited Class Wrestling Federation. Several of the Avengers had been captured by Ghaur, who was planning to use them in the creation of a Uni-Mind. Kro enlisted Enigmo to help save them, and assigned him, the Red Bull, Karkas and Ransak to save Giant-Man and the Black Knight from Lemuria's arena.

(Avengers I#371) - Enigmo fought the Black Knight; in the course of their battle, he was sliced into a number of pieces, but continued to battle nonetheless. They then combined their forces to battle Ghaur, and saved the Avengers, but had to leave with Ghaur still in command of Lemuria.

(Unbeatable Squirrel Girl II#14 (fb) ) - Known for fighting the Thing in the UCWF, Enigmo saw his career fall apart and he ended up homeless and depressed. Experiencing humanity at its worst, Enigmo was regularly harassed and experienced hatred from others. Enigmo was assaulted one day and he broke into pieces. While the others reformed and ended the conflict, one Enigmo wanted a new life, so he took himself to northern Canada and started a new quiet life. This rogue Enigmo had a lot of experiences, discovering kindness in humanity and revealing he didn't want to take over the world.

(Unbeatable Squirrel Girl II#12 (fb) - BTS) - Enigmo spent an entire decade infiltrating various areas of government, major industries, and the military, and he put together a long-term plan to take over the United States.

(Unbeatable Squirrel Girl II#12) - Enigmo tried stealing a laptop, but Brain Drain grabbed him as he sought to escape, but another Enigmo dressed as a cop liberated him. Brain Drain soon stopped Enigmo from committing another crime, but Enigmo split in two and ran away. Enigmo soon announced publicly that he was renaming the continent 'North Enigmerica', and he announced that armed militias that would be occupying cities and would only use force if necessary. In Canada, Squirrel Girl discovered a village of Enigmos living underneath her remote cabin. All of the two-inch Enigmos combined to form one normal sized one, then he sparred with Squirrel Girl. After she broke him apart into two-inch beings, Enigmo quickly tied up Squirrel Girl, Nancy Whitehead, and Maureen Green.

(Unbeatable Squirrel Girl II#13) - In Canada, Tippy-Toe led a group of squirrels into attacking the two-inch Enigmos while the others escaped to a nearby village. There, they learned that Enigmo had seized control of the military and the media. Enigmo spied on Squirrel Girl, Maureen Green, Tippy-Toe, and Nancy Whitehead as they were joined by Brain Drain and Ant-Man, and the group soon headed toward the border. The Enigmos pulled them over, blew up their van, and watched them fall off the bridge, where another Enigmo kept watching them make plans.

(Unbeatable Squirrel Girl II#14 (fb) ) - The rogue Enigmo revealed himself to Squirrel Girl, and told her of his history, of breaking off from the other Enigmos and starting over in Canada. Enigmo explained that his primary weakness was that the smaller he got, the smaller his brain got, though individual experiences were absorbed by the prime host in the end. Enigmo planned on merging himself with other Enigmos to overwrite their morals and ethics with his own. However, when he tried, he found himself unable to merge with the others, as too much time had passed. Realizing they were threatened, the thousands of other Enigmos gathered in Toronto to battle the heroes.

(Unbeatable Squirrel Girl II#14) - After a fight, where the Enigmos overwhelmed the heroes and their allies, the heroes came up with a plan to defeat Enigmo by taunting him to grow to giant-size in order to fight a giant Iron Man. Enigmo swiftly broke his ankle due to his mass, and then the rogue Enigmo joined back with the others, engaging in a speed-of-thought debate about ethics. In the end, the Enigmos agreed to turn from world domination, and they split into their individual selves, each with a broken ankle. They went back to claim the other Enigmos, and many of them enrolled in college, seeking to better themselves.

Clarifications: Enigmo should not be confused with: Any Additions/Corrections? please let me know.

All characters mentioned or pictured are ™ and © 1941-2099 Marvel Characters, Inc. All Rights Reserved. If you like this stuff, you should check out the real thing!
Please visit The Marvel Official Site at: http://www.marvel.com

Special Thanks to www.g-mart.com for hosting the Appendix, Master List, etc.!

Coments are closed
GuideLinerPDF Plus Lite